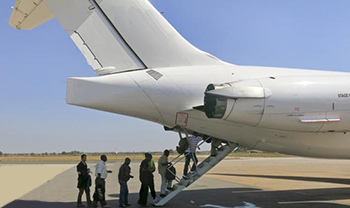 The ISTM Foundation, Inc., promotes and fosters healthy and safe travel — it focuses not only on travellers, but also on their destination and on their home communities. With increasing global mobility, health and safety issues for everyone becomes more and more critical. This applies to the movement of refugees and migrants, to tourists including low budget backpackers, to humanitarian aid workers, to business travellers, to the military and government employees, and even to sports and entertainment figures who spend much of their time traveling.

The Foundation's mission is to support the scientific underpinnings of the fields of travel and tropical medicine in order to best provide for the health and well-being of all travellers. The Foundation also acts to raise awareness of social, environmental, cultural and health issues resulting in part from travel and tourism within destination communities, with the responsibility to encourage and conduct research and develop strategies to protect these local communities from the negative impacts of tourism.

The ISTM Foundation, established 2014, is guided by:

Robert Steffen is Emeritus Professor at the University of Zurich Epidemiology, Biostatistics and Prevention Institute. Until 2008 he was the Head of the Division of Epidemiology and Prevention of Communicable Diseases and Director of a World Health Organization Collaborating Centre for Traveller's Health. He also is Adjunct Professor in the University of Texas School of Public Health in Houston, TX and Honorary Fellow of the Australasian College of Tropical Medicine.

Dr. Steffen began systematically investigating illness and accidents in travellers in 1975. He organized the First International Conference on Travel Medicine in Zurich 1988 and became a co-founder and President of the International Society of Travel Medicine. For 12 years each, Dr. Steffen presided over the Swiss Pandemic Planning Committee and the Expert Committee for Travel Medicine; he was Vice-President of the Federal Commission on Vaccination and of the Swiss Bioterrorism Committee. He is a frequent advisor to the World Health Organization, 2018 to 2020 he served as Chair to the Emergency Committee on Ebola Virus Disease in the D.R. of Congo.

She was the Chief Medical Officer at PaxVax, following nearly two decades with Novartis Vaccines and Diagnostics where she led teams developing and licensing meningococcal vaccines and blood screening diagnostic solutions. A former EIS officer with the U.S. CDC, she received her medical degree from Oregon Health Sciences University and completed residency and fellowship training in Internal Medicine and Infectious Diseases in San Francisco.

She is an independent director at OrSense, on the Advisory Committee of The Lemelson Foundation and serves on several non-profit boards, including the International Society of Travel Medicine Foundation, the Sustainable Sciences Institute, and the Karuna Foundation.

Dr Mike Jones, MB, ChB, FRCP (Edin, Glasg & Lond), FFTM RCPS (Glasg) graduated from Aberdeen University in 1972, and was appointed a UK Technical Aid Officer at Kilimanjaro Christian Medical Centre, Tanzania 1976-1982. On return to the UK he co-founded HealthLink360, a not-for-profit charity providing whole person health care for expatriates working with voluntary agencies throughout the developing world. He was Medical Director from 1983-2006, Consultant Physician until 2018 and is now a Consultant Advisor. He set up a thriving public access HL360 Travel Clinic in 2004. Mike was also a physician at the Edinburgh Regional Infectious Diseases Unit (RIDU) from 1983 and Consultant from 2005, managing his own HIV patient cohort for nearly 30 years and founded the RIDU Travel Clinic in 1993.

In 2007 he joined the Board of the Faculty of Travel Medicine at RCPS Glasgow, was elected Vice Dean in 2009 and Dean 2012-2015, where he encouraged international links and educational development. He was Editor of Tropical Doctor from 1995-2002, edited Travel Health pages for the GP Newspaper Pulse 1994-2020 and was Associate Editor of Travel Medicine and Infectious Disease 2015-2018.

He joined the International Health Advisory Committee of the Mission Agency SIM in 2001. In Zambia he supported the roll out of ART with the Lothian-Zambia HIV/AIDS Partnership 2003-2009 and the advised the Government of Oman on developing Travel Medicine services in 2014 and helped organize a 2015 conference on Travel Medicine in Muscat. He was Chair of the ISTM Psychological Health of Travellers Interest Group 2014- 2017 and became ISTM Secretary-Treasurer in June 2019.

Dr. Kain is a Professor of Medicine at the University of Toronto, a Clinician-Scientist, and the Director of the Sandra Rotman Centre for Global Health, University Health Network -Toronto General Hospital. His research efforts are focused on new diagnostics and interventions for global infectious disease threats particularly as they pertain to maternal-child health, migrants and travellers. His efforts are also focused on global equity, knowledge sharing (including the transfer of appropriate technologies and the training of research scientists in low and middle income countries), and enabling and empowering research scientists in low and middle income countries to address global health problems in a sustainable fashion. He currently operates research projects in multiple sites in sub-Saharan Africa and Southeast Asia.

Professor Torresi is a Professor of Medicine at the University of Melbourne, a Fellow of the Royal Australasian College of Physicians and the Faculty of Travel Medicine of the Royal College of Physicians and Surgeons of Glasgow. He has a PhD in Microbiology and heads the Hepatitis and Virology Research laboratory in the Department of Microbiology and Immunology at the Peter Doherty Institute, University of Melbourne and Eastern Infectious Diseases and Travel Medicine in Melbourne. He was the former director and co-director for the Melbourne GeoSentinel® Surveillance network, former Chair of the Publications Committee of ISTM and is the current chair of the Older Travellers Special Interest group. He is the senior an infectious diseases physician at Knox Private hospital, Epworth Eastern hospital and the Austin Hospital Hepatitis Service, Victoria, Australia.

Professor Torresi's laboratory research has focused on the development of vaccines against viral and emerging diseases including dengue, hepatitis C and most recently COVID19 and related coronaviruses. His research into coronaviruses has attracted significant funding for the development of a pancoronavirus vaccine to combat future emerging viruses. Professor Torresi's research in travel medicine led to seminal changes in the clinical practice of the discipline. His focus has now shifted to addressing key issues in understanding the spectrum of infections and of vaccine immune response in the older traveler.

Mary E. Wilson, M.D. Clinical Professor, Epidemiology and Biostatistics, University of California, San Francisco; Adjunct Professor, Global Health and Population, Harvard Chan School of Public Health. Her academic interests include antibiotic resistance, emergence of microbial threats, travel medicine, and vaccines. She is a fellow of the Infectious Diseases Society of America, the American College of Physicians, the American Society of Tropical Medicine and Hygiene, and the International Society of Travel Medicine. She served on the Advisory Committee on Immunization Practices (ACIP) of the U.S. Centers for Disease Control and Prevention (CDC), the Academic Advisory Committee for the National Institute of Public Health in Mexico, and on five committees for the U.S. National Academies, where she was Vice-Chair of the Forum on Microbial Threats through 2019. She is the author of A World Guide to Infections: Diseases, Distribution, Diagnosis (Oxford University Press); senior editor, with Richard Levins and Andrew Spielman, of Disease in Evolution: Global Changes and Emergence of Infectious Diseases (NY Academy of Sciences); author of Antibiotics: What Everyone Needs to Know (Oxford University Press, 2019); and a medical editor for CDC’s Health Information for International Travel (Yellow Book). She is a member of the Advisory Board, Fogarty International Center at U.S. National Institutes of Health.

Jodi Metzgar recently took over the post of Executive Director and works with the Executive Board for oversight of all ISTM activities. Jodi joined ISTM in 2015 as the Managing Director of Projects and was promoted to Deputy Director in 2017 and then to Acting Executive Director in 2020. She began her post as Executive Director January 2022. Before coming to ISTM she was employed by the Sherwood Group, where she led two client teams that provided complete staffing and headquarters support to Sherwood client organizations.

With her staff she supports not only the administration of the Foundation of the International Society of Travel Medicine, but also all Interest and Professional Group Councils and helps put their goals into action by providing strategic and governance support and as well to accomplish their mission and goals. The responsibility of the Executive Direction additionally is to assure the infrastructure for the CISTMs — even during a pandemic.

Non-Voting Member of the Board

International Migration Conference. Human migration is now at an all-time high, accounting for 240 million persons and is shaping world events and fueling political and public debates. People have been migrating since the beginning of human history to escape natural catastrophes, wars and suffering. As a result, migrant populations are heterogeneous and are facing a broad range of health needs. Migrant medicine is a rapidly developing discipline to address the complexity of such needs.

The ISTM is held an international forum October of 2018 to discuss scientific evidence on migration-related issues, with a specific focus on the health aspects affecting migrant populations and host communities in Rome, Italy. The forum will brought together public officials, policy makers, clinicians and others who care for migrants and their introduction into their host communities.

Our goal is to support needed research by promising young researchers who may not otherwise find funding, as federal and other institutional research support becomes more difficult to obtain. By cosponsoring awards, we hope to expand the awareness of our awards among the research community and attract the best possible candidates each year. We award research grants on global health, travel medicine and migration medicine issues.

Biennial travel grants for ISTM conference presenters. Travel grants and a waiver of registration fees are awarded to presenters of abstracts from resource-poor countries as well as to young investigators who otherwise do not have the funding to attend international conferences.

GeoSentinel®. This emerging infectious disease network was created in 1995 as a joint project between the International Society of Travel Medicine (ISTM) and the U.S. Centers for Disease Control and Prevention (CDC).

With the recognition of growing problems related to emerging infectious diseases, global health security has become an important agenda item for many countries. New microbes, drug resistance, the potential for accidental or purposeful release of hazardous bioagents, and the globalization of travel and trade continue to be serious challenges.

The U.S government recognized with the creation of GeoSentinel® that real- time evaluation and reporting of illness in returned travelers (tourists, missionaries, migrants etc.) across multiple sites in multiple continents could serve as an early warning for incipient epidemics and spread of infectious diseases from one country to another. Over the past 20 years, the GeoSentinel® Surveillance network has provided robust data that for the first time defined the spectrum of illness and its relation to place of exposure for many significant health risks that face travelers and migrants. GeoSentinel® has several major objectives that include serving as an emerging infections sentinel network to conduct surveillance for emerging infectious diseases; rapidly sharing novel data on emerging infections with participating sites, internet information services, and public health authorities (e.g. World Health Organization, European CDC, Public Health Agency of Canada, US CDC); and analyzing, presenting, and publishing surveillance results collaboratively with CDC, GeoSentinel® sites, and our two regional partners, CanTravNet and EuroTravNet.

Please Donate to the ISTM Foundation

We encourage contributions to the ISTM Foundation to help support these important efforts. You can donate by credit card through our secure online portal by clicking the "Please Donate Now" button below. If you prefer making a donation wire transaction, detailed information is available here. All contributions to the ISTM Foundation, as a 501(c)(3) organization are fully tax deductible under the United States law. Please check with your tax professional for details in your home country.

For more information please contact Jodi Metzgar of the ISTM Secretariat. The Foundation greatly appreciates your support and thanks you for your commitment to developing tomorrow's leading healthcare professionals addressing travel medicine and global health.